Tres Leches is a popular Mexican cake that is soaked in a mixture of 3 milks, giving it a moist texture. My version combines a cake batter with whipped egg whites, which makes a tender cake. It soaks up the milk beautifully! Top with cinnamon scented whipped cream, and serve with fresh strawberries. Be sure to cut a big piece for yourself because this will disappear fast! 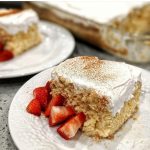 In a bowl, sift together the flour, baking powder, and salt. Set aside. In a stand mixer, combine the egg

yolks with the ¾ cup of the white sugar and beat until pale yellow. Add the vanilla and milk and mix until

combined. Add the flour mixture, and incorporate just until combined. Don’t over mix!

In a separate bowl, beat the egg whites on high speed, gradually adding the remaining ¼ cup of sugar until

stiff peaks form. Fold the egg whites into the batter, gently, just until combined. Pour the batter into the

prepared baking pan and smooth it into the corners. Bake for 25-35 minutes, or until a toothpick inserted,

Combine the whole milk, heavy cream, sweetened condensed milk, and evaporated milk in a bowl; and

whisk well. When the cake has cooled completely, poke holes all over the top of the cake with a knife. Pour

the milk mixture over the top of the cake. Cover and refrigerate for at least 4 hours, or overnight; allowing

the cake to soak up the milk mixture.

When ready, make the topping by whipping the heavy cream sugar, vanilla extract, and cinnamon, until stiff