Although these weren’t the barbecue pork chops my kids asked for, I am confident in saying they enjoyed these just as much. Tender and tasty — these pork chops are a bit tangy, and pair perfectly with roasted potatoes. 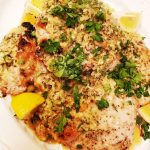 Tender and tasty — these pork chops are a bit tangy, and pair perfectly with roasted potatoes.

Preheat the oven to 400°.  Season the pork chops with salt and pepper and dip in flour. In a

skillet, heat the oil until hot. Once the pan is hot, add the pork chops and press them evenly into the

pan, so that the entire bottom surface of the pork chops sear well.  Cook for 2-3 minutes, or until they

are golden brown. Turn and brown the other side as well; again for 2-3 minutes.  Carefully transfer the

skillet to the oven and bake until an instant-read thermometer reads 145°, about 7 minutes.

Remove and cover tightly with foil; allowing to rest for 10 minutes.

Meanwhile, add the shallots and garlic to a skillet and cook over low heat, until soft and

translucent. Add the wine, bring to a simmer over medium high heat; and reduce the liquid to 1/4 cup,

about 2 minutes. Then add the stock and reduce by half, about another 4- 5 minutes. Whisk in

the lemon zest and juice, rosemary, thyme, and mustard, salt, and white pepper until well

combined. Season with salt and white pepper. Transfer the chops to plates and top with the