I know it’s not quite December yet, but my mind has been on holiday baking for weeks now. I can’t help it! Something about peppermint just makes me happy, and December is the one time a year that peppermint is finally all around us. Peppermint inspired these tarts, and I know you’ll love them! 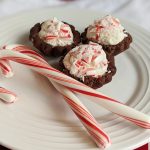 Cream the butter and powdered sugar together until well combined and light in color. Add the egg,

beating well, until light and fluffy. In a separate bowl, sift the flour, almond flour, cocoa powder, and

salt together. Slowly add it to the butter mixture, beating slowly, until just combined.

Place the tart tins on a baking sheet and spray with cooking spray. Roll 1 ½ tablespoons of dough into a

ball and place in the tart tin, pressing the dough down into the bottom and up the sides of the tin. You

can use a wooden pastry press, sometimes called a tart tamper; which makes this much easier! They

have them on Amazon for a great price. Prick the pastry with a fork, around the edge and in the bottom,

so it doesn’t puff too much. Bake for 12-15 minutes. Remove and cool completely!

Whip the heavy cream, until stiff peaks form. Put in a covered container and refrigerate. Melt the white

chocolate in a double boiler stirring occasionally. When melted, add the peppermint extract and mix

well to combine. Remove and set aside to cool. In a separate bowl, beat the egg whites, gradually

adding the sugar, until they become glossy and stiff peaks form. When you pull up the beater, and you

have a nice peak that doesn’t fall, you’re ready. Fold the cooled, melted white chocolate into the stiff

egg whites, until well incorporated. Then fold in the chilled, whipped cream, carefully. Transfer the

mousse to a piping bag with a large tip. Fill each COOLED tart shell with the mousse. Top with crushed